Labels
Topics All About Me 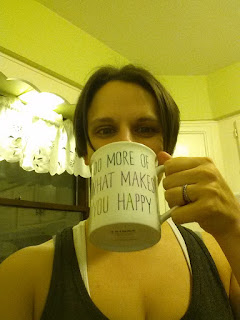 My yoga journey began in January of 2012. Life had handed me series of curve balls, to put it mildly, and I was a rusted spring, ready to snap at a moment's notice. It was unhealthy, and I knew that. I knew I desperately needed to make a change. I was so overwhelmed, though, I didn't know where to begin. At that time plenty of magazine covers were praising yoga as a cure-all, with 10 minute sequences for just about everything -- stress, weight loss, sleep aid, you name it. In December of 2011 I had received a mailing from my local dance studio that there would be a 10-week yoga session. Deciding it was worth a try, I signed up.

I only got two sessions in before there was a conflict of programs at the studio and yoga had to be cancelled. But those two sessions were all I needed. I was hooked. Of course, back then, I had no idea all the benefits I would reap or the path I would eventually find myself on. I just knew I slept better after those two sessions than I had in months. So maybe those magazine covers weren't full of bologna. The only problem was, now that the sessions and the dance studio were cancelled, where would I practice? How would I begin to start a practice?

The answer arrived in my mailbox in March. Twice a year a catalog arrives in the mail with the latest programs being offered by Stroud Region Open Space & Recreation. In the spring there was a 10-week yoga session guided by a local teacher for $80. $10 a class? I could beat that. It was a short-term commitment, perfect for me to find out if those two classes were the real deal for me, or just a fluke.

It wasn't a fluke.

But money was tight, so I didn't explore other opportunities when those 10 weeks were up. The summer went by, yoga-free, and then I signed up for another 10-week session in the fall. The teacher graciously offered to extend that session by another 4 weeks, which we all took her up on. By that time, I was officially hooked. So when the session ended I decided I couldn't go all that time without practice. I bit the bullet and bought a 5-class card at our local studio, then known as Sundari, now known as Boundless Yoga. I continued to by class cards so I could continue my weekly practice when the classes at the community center were suspended. By 2014 I was practicing exclusively at Boundless and in 2015 I had upped my practice to twice a week, regularly. If I skipped a session it was as if I skipped a dose of medicine. I felt it, everywhere. I felt it in my sleep patterns. I felt it in my moves. I felt it in my appetite.

Over the years I have felt my practice grow in many ways. First there was the obvious ways. I would start to go deeper into poses. I could hold them longer. My lung capacity increased. And eventually I was able to empty my mind of all thought and relax during shavasana.

And over time, I took my practice off the mat. I started cutting back on the amount of meat I consume and increased my daily fruit and veggie intake. I cut back on the amount of soda I drank. Not a big coffee drinker to begin with, I cut back more. Already enjoying my time in the kitchen I cooked more meals and blogged about it, I started to take a closer look at the quality of the ingredients I was buy to make those meals. Yoga wasn't just about the moves on the mat anymore. It was also about the moves and decisions I made off the mat as well during every day life.

I would see lists from various organizations and media on Facebook about signs that "you are a yogi." I always wondered when I would start to feel like one. I can say that now I finally do. And it wasn't about holding a pose or the number of days I practice. It wasn't about meatless meals or green tea. It was about everything. One of the definitions of yoga is "union of the self with the Supreme Being or ultimate principle." That is what happened for me. All those little pieces, those various benefits of yoga, united to make one whole yogi. Me.

And as my practice this year, I have found myself writing, speaking with friends, finding ways to communicate all of my self-realizations. I wanted to share all the wonderful gifts yoga has given me. So I decided to start this blog to reflect up my journey so far, and use it as a tool to continue my path to self-discovery. And if some yogis -- new and old -- should find this blog along the way and find it useful ... so much the better. It is all about community, sharing, and the adventures along the way. To quote Aerosmith's "Amazing," "life's a journey, not a destination."