"Anything can be a meditation."

The meditation portion of yoga has not come as easily to me as the physical practice did. In the early days of my practice I would lie down in Savasana, and as the teacher would guide us to release our thoughts, I would be mentally running through the list of things I had to do when class was over. I guess that would have been fine if I acknowledged the thought and then released it, but that didn't happen.

As I started taking classes with other teachers, meditation would be explored even deeper at times. There would be a timed meditation every now and then. For me, these sessions played out much like the scene in the movie Eat, Pray, Love. Liz has a flurry of thoughts run through her mind during meditation and when she finally opens her eyes only one minute has passed. Yeah, it felt just like that for me. (Which is probably why I still get such a kick out of that scene.) I'd be sitting in easy seat trying to concentrate on my breathing but eventually thinking, "Are we done yet?"

But as the saying goes, "Practice makes progress." And while I still don't have a daily meditation practice, I do feel more comfortable with meditation and no longer panic when asked to meditate in class. I am able to acknowledge and release my thoughts now, and five minutes seems to fly by.

I credit this change to the teacher of one of the classes I attend regularly. November was all about meditation. Every week, several times during class, we would meditate, experimenting with different breaths and techniques. Any discomfort and hesitation I still felt towards meditation drifted away. The weekly practice allowed me to give up the notion that I had to sit in Lotus with my eyes closed and my hands in Mudra to be properly mediating. It wasn't about how I looked on the outside; it was about how I felt on the inside. And whatever I needed to do to get there was what I needed to do, and that was fine.

Saying I needed a meditation practice was easy. Implementing one in my home? That proved to be more difficult than I anticipated. Every room in my house is spoken for, so finding a dedicated space without distractions for meditation was proving to be a challenge. Carving out the time for meditation was easier said than done as well. The few times I attempted it, though, felt very uncomfortable. It didn't have that easy transition that it does in class, moving from asana to meditation, from meditation to Savasana. It didn't feel natural. It didn't feel like me in my own space. It felt like I was forcing myself to be a certain way, much like I did when I first started meditating during class.

I was going to move forward with it anyway, though, hoping the adage "practice make progress" would prove true a second time. Then I remembered something I heard during a workshop I participated in: "Anything can be a meditation." (Seeing the dots on the rocks and knowing the kind of concentration it takes to create that, it's easy to see how painting would be meditative.) I didn't need to sit on my bolster with my eyes closed and meditate. I needed to find the activity that was meditative to me. 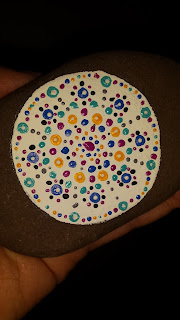 The mandala I painted at the workshop.

(And the heavens opened and the angels sang.)

So now, an hour before bed, I read. No TV. No kindle. (I'm going "old school"; books only.) No phone. No computer. I read for an hour, less if I'm tired, and then it's lights out. And it's working.

The no TV in bed rule has been a harder adjustment for my husband, who has been falling asleep to the TV since he was a teenager. He supports my practice, but thought I was going overboard with this one. Still, he was willing to go along with it on a trial basis. Then Sunday morning he told me, "I don't know if it's really the no TV rule, but the nights I didn't watch it in bed I slept much better."