Labels
Topics Off the Mat

Another year has gone by. It's a time of reflection, of setting goals, of dreaming dreams, aspiring and hoping for good things to come. It can also be a time of immense pressure. As the song goes, "What are you doing New Year's Eve?" Are you surrounded by friends or family? Did you have many invitations as to choose from? Are you spending the holiday as you usually do? Do you like to ring in the new year quietly? Or perhaps because of your line of work, New Year's Eve and New Year's Day are just two days of the week like any other day.

Who decided that this one day, the last official day of the year, should be a statement about your social life?

To that I say bah-humbug!

I remember the first New Year's Eve my husband and I spent together in 2001. He was working in HV/AC at the time, and was on call that holiday. So while we could go out, we opted not to, in case he got a call and we had to leave. We didn't want it to be money down the drain. So we ordered Chinese food and watched The Family Man, and had a low-key New Year's. And it was lovely! And while we went out here and there to spend the evening with family or friends, to us, at its core, the holiday was a quiet evening at home with Chinese food and a movie.

This afternoon, I went on a mini-date with my son. Just a quick stop at Dunkin' Donuts for something to drink and some conversation. We started discussing New Year's traditions, and maybe starting some new ones, and that's what got me thinking about how we look at this day. Why is there so much pressure on how we spend it? We overindulge, set resolutions to eat better and exercise more, and many give up on that before the calendar turns to February. What gives? Clearly we aren't succeeding. It's time for a new plan.

The conversation with my son on our mini-date and meditation this past week has me looking at this time from a new perspective and with renewed energy. It's time for a change. No more business as usual. It's time to be the change I want to see. And with that in mind, here are some ideas I have for my family and I for 2017 and beyond.

Tradition #1: Look forward. I asked my son what he was looking forward to most in 2017. In typical 8-year-old fashion, he answered "my birthday and Christmas." I pointed out to him, though, that those things happen every year, not just in 2017, so I asked if there was anything he was looking forward to that would take place JUST in 2017. That gave him pause. It gave me pause as well. The obvious answer for me is completing my 200-hour yoga teacher training, but I think it goes deeper than that. I have grown so much more reflective since I started training, and I am looking forward to seeing how I continue to grow and develop emotionally and spiritually. I am the woman who, at the start of training, did not have a meditation practice AT ALL. I started daily meditations as a part of training, and now I not only look forward to them, but schedule them each daily on a weekly basis. I've learned I really am capable of anything when I set my mind to it and I feel it serves me. Who knows what lies ahead in 2017? I can do anything!

Tradition #2: Gratitude. This one is not entirely new. Towards the end of 2014 Vin saw some photos of Christmas presents friends received and bemoaned that they received better presents than he did. I looked at the piles of gifts under the tree and thought, "oh Hell no!" On January 1, 2015, I went out and bought a hurricane and scrapbook paper and told the family we would be keeping a gratitude jar. We kept one in 2016 and I want to keep one in 2017 as well. But I want us to make the effort to sit down as a family and really read through all those gratitudes so we reflect upon the year gone by and discuss what we want for our family in the year ahead. (I'd rather have that quiet time with my family than listen to Ryan Seacrest.)

Tradition #3: Find a new perspective. It's so easy to become set in our ways! Don't get me wrong; there's value in routine. Routine is what gets my kid on the bus on time every morning. Okay, most mornings. But we often get stuck in that routine and settle into it in other aspects of our lives: how we approach new tasks, how we approach new people, relationships, and even how we look at and treat ourselves. Something I kept hearing over and over in 2016 from various people in my life was the phrase "I'm so lucky." "I'm so lucky I don't have to work." "I'm so lucky my kid does well in school." "I'm so lucky my kid isn't a picky eater." "I'm so lucky I have a glow about me." Well, maybe not that last one, but you get the idea. But it was that first sentence, being lucky about not having to work, that really gnawed at me this year. I am a working mom, and the breadwinner, so from a financial perspective, I HAVE to work. BUT ... Sometime this fall, I decided instead of being down on myself for my situation to look at it from another angle. I am fortunate to be woman in the United States, where education at any level is easier to obtain than other countries. I am fortunate my parents supported my dreams of attending my dream school, The College of New Jersey, and helped me achieve that dream financially, even when it meant turning down a full-tuition scholarship from another school. I am fortunate I found a passion, and at a time when my fellow graduates took jobs unrelated to their degrees, I have only worked in the field that called to me: online journalism. I am fortunate that I had wonderful bosses who saw my potential and gave me the push and room to grow as an employee, rewarding me with promotions. I've had two jobs since graduating college. I was promoted twice at my first job, and three times at my current job. I now recognize those promotions didn't happen because I was lucky. They happened because when the opportunity arose I was ready for it. That was all me. 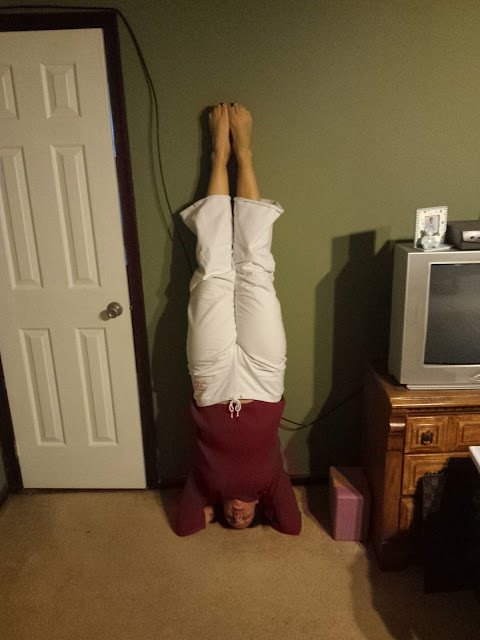 Gaining a new perspective in headstand on the Winter Solstice

Tradition #4: Clear out the clutter. Last year my husband and I decided we were going to spend 2016 clearing out the emotional clutter. Now, we recognize this will forever be an ongoing process. Such is the nature of being human. But we feel we have done enough to take on the next big pile of clutter -- physical clutter. On the surface it would seem we have this in reverse. Generally speaking, it is much easier to deal with the physical over the emotional. But for us, we have so much emotional attachment to our physical things. There's a memory or a person associated with everything, and we are in this cycle of holding onto everything either to show our love or because we are not emotionally ready to let go. But in dealing with a lot of the emotional clutter in 2016 we are ready to deal with the physical clutter in 2017. When we moved into our house nearly 12 years ago we had big plans. Various up and downs put those plans on hold. And then it just became easier to stay in the rut than move forward. But now we are ready to reflect on those dreams, revise them to fit who we are now, and move forward.

Which brings us back to tradition #1. I love it when things come full circle.

And I love this new perspective on New Year's, too.