Labels
Topics Aha! Off the Mat

This post was originally published on Facebook on February 8, 2011, and appeared in my memories feed. It hit home today, because the message isn't just one for when our kids are small, but for every day of our lives, no matter where we are on our journey. Every day is about the moment.

Last night I had a dream Pete, Vin and I moved to my hometown, a few streets over from my parents' house, from where I grew up. But the town was as it was when I was growing up, not as it is now. Less stores, less traffic, less pavement, and a little less heat in the summer. I was staying home in the summer, raising Vin, who was playing kickball in the cul de sac and freeze tag on the front lawn with the neighbors' kids, running through the sprinkler in red swim trunks and to the curb to flag down the ice cream man, catching lightning bugs in his hands and sleeping in a tent in the backyard. It was my childhood. Only, this time, Vin was living it, and I was the mom. I am the mom.

And I wish I could go back in time, or somehow bring the past to the present, and give my son the carefree youth I think he should have, instead of the one I fear he will only see on TV and in movies. Even in the nearly 6 years since we moved up here, to "the country," it has built up, expanded, and it's not what it was. Many of the "amenities" are the same, but much has changed as well. And I find myself wishing I had savored my childhood and those carefree moments more, like the grown-ups in my life told me to, instead of being in such a rush to become an adult. And kids now-a-days grow up even faster.

It's scary and sad to think about. So instead of thinking about it, instead of rushing into the future, maybe I should finally heed the advice of those grown-ups and just savor the moment.

So for now I'll take his small hand in mine, savoring the soft feel of his skin, and just dance. 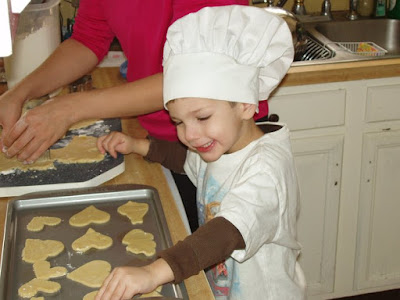 Vin and I baking cookies for Pre-K's Valentine's Day party