I saw on social media this morning that it's your birthday. Happy Birthday! And while the odds of you reading this are only slightly higher than mine of becoming an MLB player, I wanted to take a moment to say "thank you." Thank you for being you, and for playing the game.

We are big fans of baseball in my house -- Yankees fans, specifically. So it's no surprise that when my son turned one he received a Fisher Price tee and was swinging the bat. Back then, the tee was nearly up to his shoulder. But it didn't stay that way for long. You see, my son's father is 6'7" and my son is following in his footsteps. He's not waiting for high school to have a growth spurt. His height has been off the charts, literally, since he was a year old. 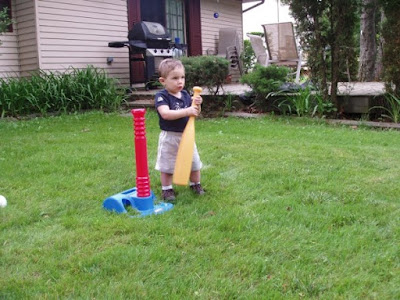 In another surprise twist, he first started swinging the bat lefty. Toddlers aren't "righty or lefty" at that stage of their development. And while my son would eventually do nearly everything else righty, he bats lefty. My mother-in-law taught him to catch. My husband taught him to throw. And before we knew it, our summers were all about baseball.

But the one thing my husband and I always told him was the most important part of the game is how you carry yourself on and off the field. We pointed to Derek Jeter as a role model, and to this day he still wears #2 and he wears it with pride. I thought attitude and behavior would be one of the hardest lessons we would have to teach him, but it turns out patience with himself is a million times harder.

Because when you're tall, people often think you're older than you are, so they expect more of you. It wasn't easy being the youngest on his Little League team while also being one of the tallest. He started to absorb those expectations others had for him, and would become hard on himself when he didn't perform as he thought he should. That load is too heavy for a 7-year-old's shoulders to bear.

Those expectations were compounded by his growth spurts. Every season when he would head into practice he would essentially need to relearn everything. His muscle memory from the previous season no longer served him. His feet were bigger and the men's cleats were heavy, requiring a bigger effort to pick them up so he wouldn't trip over them. He would have to learn the new length of his stride. And longer arms would require relearning his pitching mechanics and strengthening his back muscles to support his longer wingspan.

To an adult, this sounds reasonable and makes sense. But to a child, well, he just wanted everything to come to him as easily as it seemed to come to his teammates.

Then in 2017 everyone was talking about the Yankees new right fielder, Aaron Judge. He was a big guy. That was the story... at first. Then the story was the big guy hitting all of those home runs. But for my son, he saw ... himself.

And he fell in love with the game all over.

He started watching the games in 2017 to see those home runs. Now he watches to study you. He recently added right and center field to the list of positions he plays. He watches how you track the ball, cover the ground quickly, and fire that ball in to third base or home plate with unbelievable accuracy. He listens to the announcers discuss the adjustments you've made to your batting stance. He understands that the hard work DOES pay off for the big guys as well as the small. And he wears knickers to help the umps see where his knees really are. 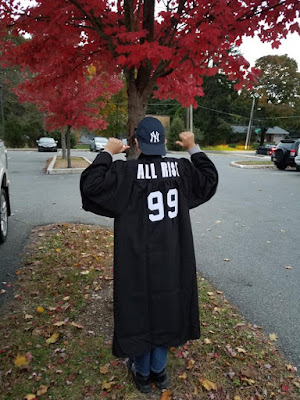