Labels
Topics All About Me Teacher Training

A Teacher's Journey: A Reflection 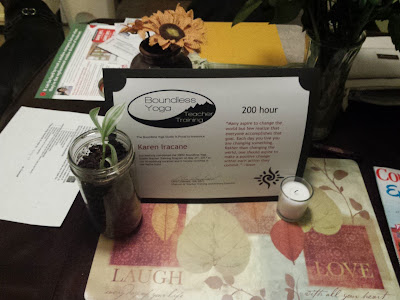 Lesson #1: Take Risks
I'll be honest, for me, just signing up for the teacher training program was a risk. It could have ended there, but it didn't. I took a risk when a studio I didn't practice at posted that it was looking for new teachers. I started a new class at a studio where the students didn't know me. It was a risk for the studio, but for me and my barely-there confidence as a new teacher, it was a HUGE risk. Did it pay off? Was it worth it? Absolutely. I met new people and challenged myself to teach in a space that I wasn't as familiar with. Each week I wasn't sure who would show up, or if anyone would show up for class. But I showed up -- both for the class and myself. I learned that I can take risks, and even when they don't play out the way I want them to, I will survive and take what I learned onto the next adventure.

Lesson #2: Sometimes You're Hot; Sometimes You're Not
Since I began teaching I've had classes with numbers that swung the pendulum. There were classes with upwards of 15 people and I was short on props to support everyone. And I had stretches with only a handful of students or none at all. No shows? Man does that bruise the ego! Big time. How could it not? You put in the effort to create a class, make the trip to get to the studio early to open, set up, and give yourself time for grounding before people arrive, only to have no one arrive. Ouch! I'll never forget the first time that happened. I cried. It happened again the following week -- though it was snowing that second time. But still, I was convinced after that that I would be receiving a call to tell me my class was coming off the schedule (which it did 8 months later).

While the small classes weren't good for business, they were excellent for refining my teaching skills. As a naturally shy person, having smaller classes helped to keep my nerves in check. Eventually I did that enough so when I had large groups, I didn't feel so overwhelmed. Many of the students I saw were older. Some were just starting a yoga practice. Some were coming back to the mat after recovering from injuries or surgeries. And others just had some physical limitations. Those smaller settings helped to calm their own nerves, and it allowed me to really work with those students and help them to make the necessary adjustments so they could feel comfortable and confident in their own practice. I am so proud of those smaller classes and what I was able to offer, even when it wasn't financially viable.

Lesson #3: When One Door Closes, Yes, Another One Does Open
Let's be frank, it sounds so cliché. This idea that when a relationship of some kind, a work opportunity, anything that you really value, when that comes to end there is something else ready to replace it, can come off as an "every cloud has a silver lining" platitude. But I like to think of it like this: we all get the same 24 hours in a day, 7 days in a week, 28-31 days in a month, and 12 months in a year. What are you doing with that time? You can only do so much. So when something comes to an end, it's freeing you up for something else. But here's the catch: the new thing doesn't have to look exactly like the previous thing.

"When one door closes another one opens." So often, we are looking for the exact same door. Forget the doors. Nothing will ever be exactly the same anyway. And depending the circumstances of the ending, do you want the new thing to be exactly the same as the old thing? Probably not.

I had a class come to an end. The summer came, attendance dropped, and it was time to reevaluate the schedule. I was offered to move that class to a different day and/or time. And I sat with that and thought really hard about it. In the end, I decided that chapter had come to a close and deep down in my heart didn't think what really worked about that class would work on a different day and/or a different time. So I made the difficult decision to close the book on that chapter. And sure enough, about a month later, and different opportunity came along. It didn't look exactly the same as what I had before, but that's okay. I was able to recognize it for the opportunity that it was. It looked similar enough. But sometimes the new opportunity looks absolutely nothing like the old one. So be open, be fearless, and be willing to take the risk.

Lesson #4: It's True; You Can't Pour from an Empty Cup
This, too, can sound like a platitude, but that doesn't make it any less true. After I first graduated I jumped at any opportunity to sub a class for someone, even if I didn't really have the time for it. I was a new teacher so I grabbed tight with both hands onto any opportunity that came my way, just in case it was the very last opportunity that would come my way. Some I truthfully didn't have the time for. But I was very green at teaching and wanted to improve upon those skills, and since practice makes perfect, I did it. There were weeks where I taught four classes. And while on the surface that may not sound like a lot, please keep in mind that I was working 40-50 hours a week for my full-time career, had a husband (still do, even after putting him through that), and was raising a 9-year-old son. That's not a full plate; that's an overflowing plate. Thankfully my husband was very supportive and did his best to arrange his schedule so I could make the most of these opportunities. And while I am grateful for every class I was able to teach, the constant go was draining.

Don't neglect your own practice to teach. Don't forget to keep learning and growing. That doesn't mean you have to pay thousands of dollars and attend every training under the sun. Read articles, books, and go to as many different classes as you can. You never know where inspiration may strike. The more fun you're having and the more inspired you are, the more fun and inspiring your classes will be. It will become extremely difficult, if not impossible, to hold space for your students' practice if you do not hold that same space for yourself.

Lesson #5: Never Lose the Beginner's Perspective
I vividly remember when I first started practicing yoga, I would roll out my mat each week to the left of a student named Robin. Had it not been for her, I would have been completely lost. I would frequently peek over and see what she was doing to make sure was in the pose correctly, or that I was in the correct pose. I was a beginner. I knew nothing. By the time I completed the teacher training program I had 5 years of practice under my belt. And while I did feel I had a strong foundation that prepared me to lead a class, there was another part of my that asked who was I to think I could teach an ancient practice with only 5 years of practice myself under my belt. I was still very much a newbie.

Continue to grow in your practice. Continue to learn. Continue to refine your skills as a teacher and learn new ones. But never lose that part of yourself that feels like a newbie. It allows you to connect with new students. When a new student tells me at the end of a class that he or she enjoyed it but felt a little unsure about some poses, I tell them about the year I spent next to Robin watching her and learning from her. When I practice my classes at home I practice both the poses and the cues. I listen to the cues as if I had never practiced before. Are they clear and concise? Will they take the student where I want him or her to go? I like to turn poses in different directions. If I do this one on the floor, can I do it in a chair? Can I do it at the wall? What does it feel like? Will this variation serve someone with a knee replacement or someone with vertigo?

Approach everything as if it's brand new, because to someone in your class, it will be.