Labels
Topics Off the Mat

The Hardest Part About Having a Yoga Class

Perhaps you read this title and some ideas of what the hardest part of having a yoga class are are already swimming through your head: choosing a playlist, sequencing poses, altering those sequences when someone walks into class with limited mobility or range of motion. Maybe for you it's cueing the right and left sides properly. Maybe it's having the courage to do hands-on assists and adjustments. Or maybe it's not demoing the entire class so you can observe your students movements. All of those are valid answers. However, they are not mine.

For me, the hardest part of teaching regular yoga classes is self-promotion.

It's difficult for me. Really difficult. Like, if I was on "Fear Factor" and had to choose between self-promotion and eating the chocolate-covered cricket, I might eat the cricket. That is how much I have struggled with this since I began teaching.

Chocolate-covered crickets? I know, it seems overly dramatic. And it is. But, that doesn't change the fact that that is the way I feel, and that promoting myself is something I struggle with. So when I sit down to really think about this and work to overcome this, I am not surprised at all. I was never particularly fond of having my picture taken, even in my youth. I had a boyish haircut and was all skinny arms and legs that stuck out at weird angles. I would look at those pictures and see how different I was, and fell victim to society's messaging that different was bad. I wasn't right, and photos were documentation of that.

So I found myself quietly setting up shop in the background. And it's not that the background is the wrong place to be. It's just that while I was there, I never developed the skills or the confidence to really put myself front and center. And a result I was never good at selling myself, or talking myself up. Also, I was raised that it wasn't lady-like behavior. It could come off as bragging or being conceited. So I moved through life with the motto that "the work will speak for itself." The thing is, though, even if the work is good, or great, sometimes someone else is louder. Not necessarily better. Just louder. So now I find myself forced to confront the fear of coming off as conceited or bragging if I want to continue teaching. I am learning to use my voice alongside my work to speak up, and hopefully be heard above the din.

How do I do this? Well, first off, I'm writing about it here, and I have been blogging more. I share more on social media, too. They're not always pictures of myself, but I post about all the upcoming classes I'm teaching. And last week I spent an entire day being filmed practicing yoga alongside some of my fellow yogis and teachers. (There is safety in numbers.) And I capped it off with a sit-down in front of the camera, speaking about restorative yoga. For me, that might have been the most uncomfortable thing I have done since I started teaching. But in this business -- and yes, yoga is a business -- self-promotion is key. 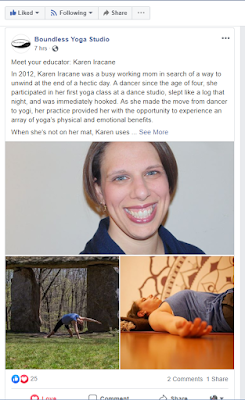 The promo above appeared on Facebook yesterday to promote one of my yoga classes. The photo on top makes the girl with skinny limbs and boyish haircut inwardly groan. But then I look at the bottom two photos. The one on the left is a woman who is focused on the movement and the pose. The camera doesn't exist. The photo on the right is a woman completely relaxed, both mentally and physically. The camera doesn't exist. And those might be the two most authentic photos of me that have ever been taken.

Last night before class started one of my students said "I saw you on Facebook." So if that was a reminder or planted the seed for her to come to class, then I am grateful for those pictures, for the shout-out. It only took 30+ years, but I am finally making peace with the camera and carving out a space for myself front and center.

Who says the lessons only come when we are on our mat? For me, I am learning just as many from being at the front of the room.